This book is a bilingual presentation of the poems and songs of the Kilchoman bards Duncan and Charles MacNiven, together with biographical material and explanatory notes for some of the poems. The brothers lived from the 1870s to the 1950s and wrote many verses, both comical and serious, depicting life in the Highlands and Islands in the early years of the 20th century. The father of the MacNiven brothers was the schoolmaster at Scoraig, Wester Ross for nearly 30 years until 1890, after which the family moved to Kilchoman, Islay.
Originally published in Gaelic in the 1930s, this is the first time the work of the Kilchoman Bards has been presented together with English translations. The book contains nearly 100 songs and poems and is printed in colour over 230 pages with 47 illustrations. 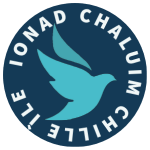